Intellectual Crisis of the Muslim Ummah International Conclave at AMU 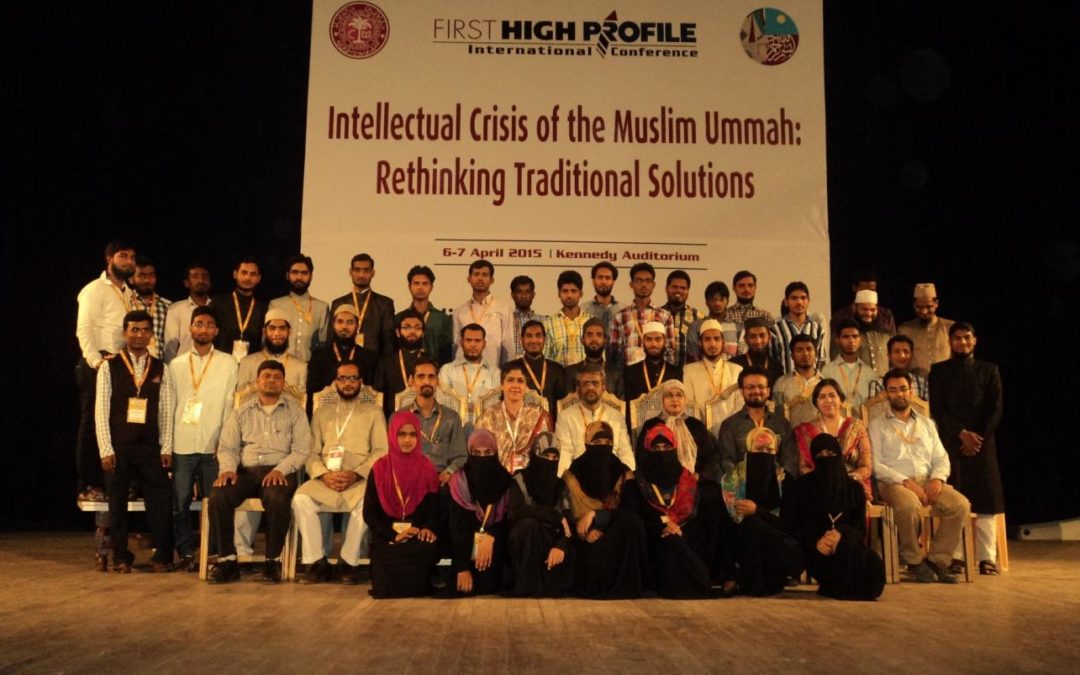 Considering the prevailing crisis in the Muslim Ummah as an opportunity, several Muslim intellectuals from around the world sat down together recently at the two-day International Conference on ‘Intellectual Crisis of the Muslim Ummah,’ held at the Aligarh Muslim University, to revisit and rethink traditional solutions. The idea was not just to focus on the present Muslim issues and the prevailing unrest, but also to chart out a future course of action for Islamic unity. The outcome of the two-day event brings an interesting summary of how Muslims see themselves today and how they would like to be seen in the future,
Brushing aside concerns about his old age and failing health, the 76-years old prominent Muslim activist, Sheikh Dr. Kamal el-Helbawy booked his own air-ticket from Cairo to fly all the way to New Delhi and then traveled through the dusty roads to a university town, Aligarh… All he wanted was to meet and interact with prominent Muslim intellectuals, academicians, thinkers, religious activists and interfaith leaders from around the world who had gathered there for a two day conclave. Helbawy, who currently holds a dual citizenship of UK and Egypt, was the former international spokesperson of Muslim Brotherhood in Europe. However, later he resigned from the Muslim Brotherhood and started working independently for the Muslim community in UK as the President of Muslim Association of Britain. Addressing the people present at the conclave, he emphasized on the need to bring together Muslims from all the sects under one umbrella and present a unified Islam to the world. The ongoing turmoil in the middle-east with the war between the Houthis, a Shiite offshoot and Yemen’s majority Sunnis, seems to have become the last straw for Muslim intellectuals in shedding their sectarian folds. For quite a few years, the house of Islam appears to be engaged in a proxy war not only with others but within itself… To make matters worse, the global terror outfits like ISIS, Boko Haram, etc. have caused further damage to the already besieged Ummah. However, thankfully, very few Muslims support the violent steps being taken by some of these misguided youths who claim to be representing Islam.
Interestingly, it is probably the first time when the Muslim intellectuals from various sects sat down together with religious leaders of other communities for such an academic discourse. The Muslim intellectuals not only deliberated on issues but also realized that it is time to pose disturbing questions to themselves, as to: who they were, whether they really are one Ummah, one nation, united in faith… or smaller cults worshipping their own cult leaders… They also realized that it is time to think whether Muslims really wish to revive their Ummah [in its most profound sense] or perish as a result of internal fighting.
The question whether Muslims can take upon a leadership role in the new world order was posed to Swami Lakshmi Shankaracharya, who was also a participant at this event. The Shankaracharya emphasized that Muslims can definitely lead the world, provided they first become good Muslims themselves…This advice from a Hindu religious head bears particular significance for the Muslims and has been applauded by the community as a whole. Some intellectuals have blamed the Muslim leadership for the present-day crisis of the community. Expressing his views on this issue, Dr. Muhammad al-Ghazali from the Shariah Appellate Bench, Supreme Court of Pakistan said that the Muslim leadership is suffering from inferiority complex. Another panelist and a renowned Shia cleric, Maulana Kalbe Sadiq said that Sunnis and Shiite not only need to act as brothers but one soul. He mentioned that this was the message given by the Supreme Leader of Shiite community, Ayatollah Sistani from Iran. The two-day conclave is the brainchild of Dr. Rashid Shaz, who is an intellectual engaged in writing on various Muslim issues since a long time. He divides his time working as a Professor at the Aligarh Muslim University as well as on conceptualizing intra-faith and interfaith initiatives. Though he comes from an orthodox Muslim family, Dr. Shaz has been a vocal critic of the present day clergy. According to him, many of the problems of Muslims Ummah can be easily resolved if the Muslim clerics play a positive role by resolving internal conflicts amicably in the light of Qur’an.
The signing of the Islamic Unity Charter by all the participants at the conference, cutting across sectarian boundaries, also marks a significant shift from their earlier positions. Several Islamic scholars from US, Malaysia and other Islamic countries attended the event. Some of the countries sent their representatives from their High Commissions in New Delhi to keep a tab on the developments.