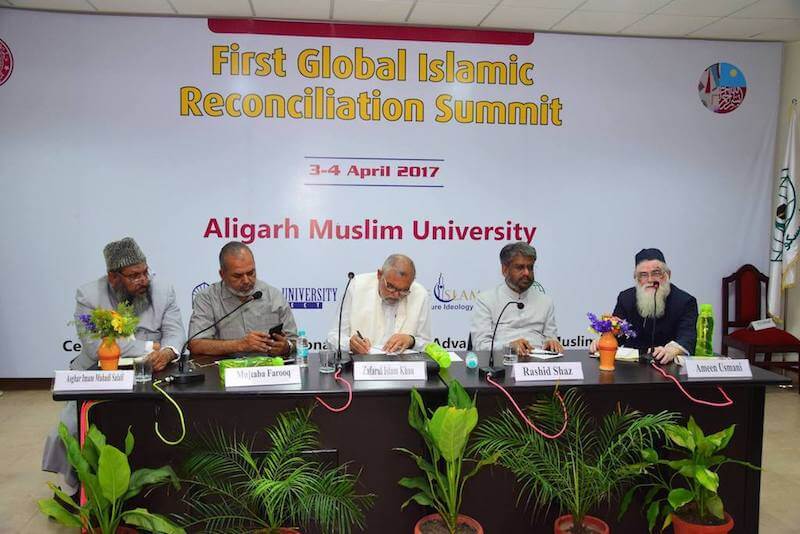 MUSLIM UMMAH: THE ROAD AHEAD

The two-day 2nd International Conference and first Global Islamic Reconciliation Summit was held at the Auditorium of the J N Medical College, Aligarh Muslim University. The conference threw light on challenges faced by the Muslim Ummah (community) across the world.
Delivering the Presidential Address, the Chief Guest of the event, AMU Vice Chancellor Lt. General Zameer Uddin Shah (Veteran), emphasized on the promotion of education among the Muslim community. He asserted that people should give up sectarian hatred and work wholeheartedly for the unity.
General Shah also appealed the intelligentsia in general and the Aligarh fraternity in particular, should rededicate themselves for the revival of the glorious Aligarh Movement with fresh energy and vigour in the true spirit of the vision and mission of Sir Syed Ahmad Khan.
Addressing the gathering of intellectuals and delegates from different parts of the country and abroad, Prof. Rashid Shaz, Director CPECAMI and ISESCO Ambassador said, “This is no ordinary conference but a wake-up call for all those who care about the future of humanity.”
Renowned Islamic scholar from Japan, Ahmed Shizaki Yuki shared his concern about the present global scenario in respect to the Muslim community.
Prof. Syed Mohammad Ali Naqvi, Chairperson, Department of Shia Theology, AMU said that it is imperative to forego our internal sectarian differences and work together to extricate the Ummah from the present difficult situation.
Dr. Zafrul Islam Khan, Editor and Publisher of The Milli Gazette said that the thinkers and religious leaders must reformulate a sustainable strategy for peace and harmony.
Noted social activist and economist, Lubna Sarwath and Dr. Kausar Fatima emphasized on the lamented marginalization of Muslim women and appealed for a fresh look for their empowerment and upliftment in the light of Islamic injunctions.
Earlier, in his welcome address, Senior Fellow of CPECAMI, Dr. M Zaki Kirmani, threw light on the objectives of the conference in view of the critical situation being faced by the Muslim Ummah.
Maulana Asghar Imam Mahadi Salafi, Secretary General of the JamiatAhleHadees Hind; Maulana Khalilur Rahman Laskar, General Secretary Markazul-Ma’arif Assam; Dr. Ameen Usmani of Islamic Fiqh Academy, New Delhi; Ms. Saira Shah Halim and Dr. Mujtaba Farooq, former President of Welfare Party of India also addressed the inaugural session, laying emphasis on intra-religious dialogue and understanding, in order to instill confidence in the Ummah and promote a sense of bonding and cohesiveness in the true spirit of universal Islam.
The two-day program was dedicated to restoring confidence among the Muslims and their faith allies. It addressed some of the major policy issues: Muslims and their Faith Allies in 2030- A Future Roadmap, the Idea of a New Aligarh: Spearheading the Second Aligarh Movement, the Future of Science Education in Madaris: Reviving the Qurtaba Model and the Muslim Personal Law as well as the major Policy Announcements during the Reconciliation Summit.